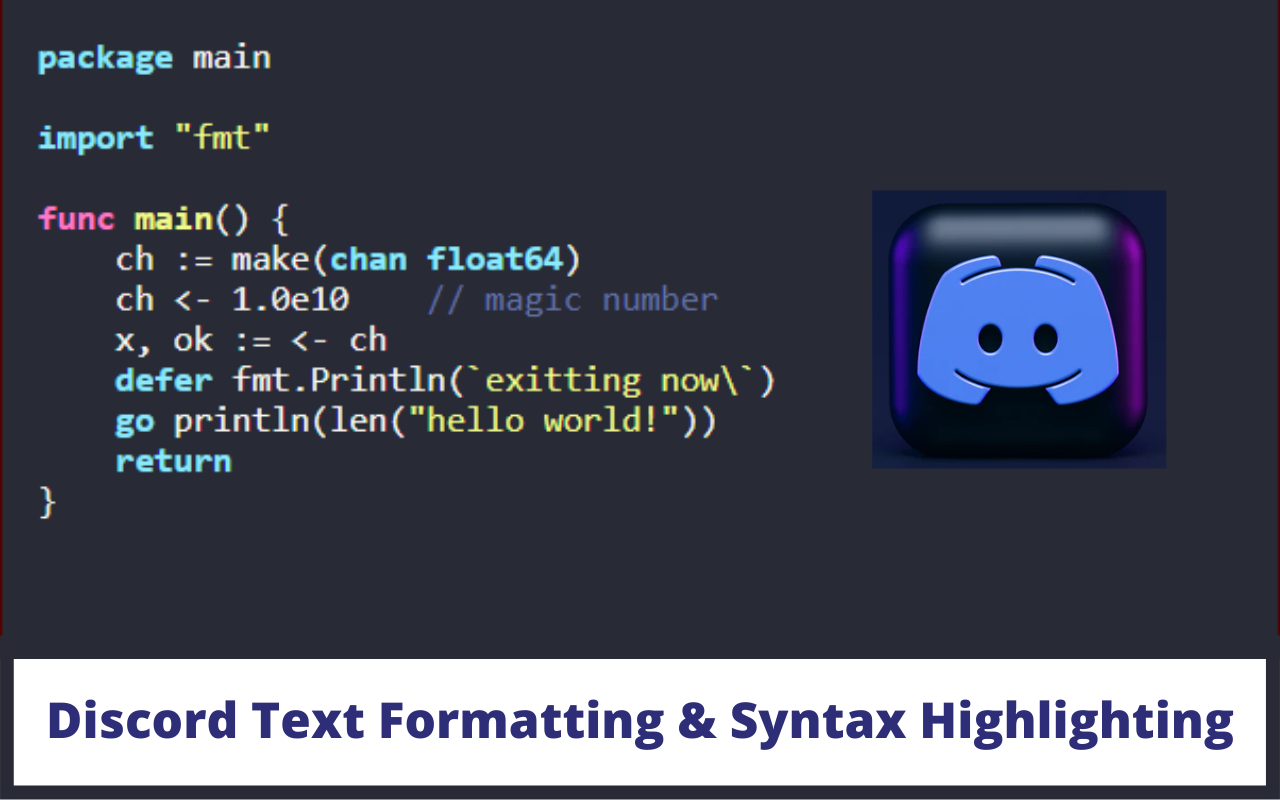 Discord is one of the best applications we’ve used for the last years, and it really doesn’t appear to be going away quickly. The fundamentals are lovely on their own, but have you ever wondered how your friends communicate using colors or bolded text? To put it another way, Discord’s text style is based on Markdown, which is a framework that may help you make your message stand out.

Though selecting between the Black and Bright designs is one of the most divisive Discord arguments, color-based customization doesn’t extend much beyond this and establishing custom role colors.

Discord, on the other hand, allows Markdown. If you’re not aware of Markdown, it’s a basic symbol-based editing system for adding features like bolded text and italics to texts.

Code blocks are perhaps the most flexible Markdown allowed by Discord. You do not need to be a programmer to utilize code blocks, and many people are unaware that such blocky boxes enable them to color their words.

In this post, we’ll teach you how to use Discord Syntax Highlighting to spice up your Discord rooms with colors, italic, underlined text, and much more.

Before we discuss further, let’s first discuss what actually text formatting is?

As a beginning point, I’ll teach you how to bold, italics, underline, etc., text. We’ll begin with the fundamentals before moving on to constructing code blocks for text coloring.

How to write Bold Letters

To make bold text in Discord, use two asterisks (*) at the beginning and end of the bold text. (for asterisk, press SHIFT+8)

By typing like this, i.e., two asterisks at the front, two at last, and typing your words between them will make them bold.

How to write in Italics

To type in italics or simple wording, to type in a diagonal way, you have to type the asterisk (to type *, you have to press SHIFT+8).

As for writing bold letters, we had typed asterisks to times, i.e., Two at the front and two at last, but for italics, we have enter asterisks once on each side.

If you will write like this( *italics writing* )and writing whatever is inside those symbols, your text will look like this:

For more understanding, look at this picture:

How to underline in Discord

To underline Discord, it is simple and easy to do like those two types above.

You just need to enter two underscores( _ ), which is commonly found near the nine number on the keyboard, merging with ( – ); for underscores, you have to press SHIFT+ ( – ).

And to underline words, you need to add two underscores( __ ) at the front and back of the words. For example, __Underline__.

For more understanding, we have provided a picture:

How to strikethrough in Discord

At last, to strikethrough the words or, in simple words, to cut through the words, you need a symbol of the tide(~), which is commonly found on the left side of the keyboard, right below the escape(ESC) button.

Add two tides at the front and backside of words to strikethrough them, for example:

This will help you strike through the words, or you can see in the picture for better understanding:

So this was the topic of Text formatting now; let’s jump into the Syntax Highlighting:

What Is Syntax Highlighting

Syntax highlighting is a function of content or word editors used for editing, writing, or languages, for example, HTML. According to the terms section, Information, particularly source code, is shown in a range of shades and typefaces. This factor allows customizing in a language, like a programming language, easier because both structural and syntactic mistakes are visible. This functionality is also used in many program-related situations, whether in brightly colored magazines or websites, to enable coding captions easy for readers.

Markdown is a simple language that was initially launched in 2004. This language was created using a basic text syntax and was intended to be clear to understand and edit. Although the initial only supported HTML, Markdown may be used with a plain text editor to create rich text like posting posts on an internet board.

Each of our materials is formatted in the backend via Markdown. Let’s proceed on to the how now that we know what’s accountable.

Now the first question which pops into your mind is going to be that whether we can edit the text in Discord?

Can We Edit Text In Discord

Discord allows you to edit text. While you’re participating in debates and chatting with friends on Discord, there’s a solid set in the backend that can edit any text, and it’s called “Markdown.”

Markdown is still a text-based system that may use cleverly positioned characters to style text on Discord into italicized, underlines, etc.

You may designate a particular wording for Syntax highlighting by entering the title of the languages you want the code block to expect immediately after the first three backticks in your code block. For Example:

Discord’s syntax highlighting supports a variety of languages in addition to Markdown. Each language has its unique approach to arrange words that can be highlighted. On the phone website, you probably wouldn’t be able to see Syntax highlighting.

We will be discussing some of the languages and their effects:

It will make your text go green.

“YAML” is a language, or it’s better to say it Syntax highlighting language.

Inserting three backticks( ` ) and writing YAML just in front of those backticks will make your words go teal in color, with the exception that if you add a hashtag before your second sentence, it will make its color go grey.

For better understanding, see the picture:

“fix” is also a syntax highlighting language, which makes your words’ color “orange.” It works on the same principle, i.e., insert three backticks before “fix” and hit enter to write your sentence in orange color. There’s also an exception if you insert an equal( = ) sign before a sentence, then the color of your words will be changed to teal.

For better understanding, see the picture:

To make your words white, red, and green at the same time, we use a syntax highlighting language named “diff.”

The procedure to use this language is the same as the above ones, three backticks with the name of highlighting language, that’s it.

Hit enter and the first sentence will be of white color. To use red and green colors, you have to add negative signs ( – ) and positive signs (+) before each sentence to get these colors, respectively.

For better understanding. See the picture:

Syntax Highlighting Language used to add white, green, and red in your material is “tex.” Three backticks are used before this language to make your system consider that you are using this particular language to write.

After specifying the language, the second step is to add a slash \ and write your words in it, then close it with the same slash to make it go green.

The third step is to add a symbol of a dollar($) or a sign(&), then repeat the previous process, i.e., insert your words and then close it with a symbol($) or (&). For better understanding, see the picture:

So this is how this works.

It’s as simple as it gets when it comes to entering codes into Discord. The two most popular methods are as follows:

To signal to Markdown that you want to create a new line, write three backticks and then enter your code into Discord, hitting shift while doing so.

This technique is excellent for shorter code or when you wish to utilize code in a discussion, such as sharing a single-line code sample.

And at last, we would like to answer the most frequently asked question that is If we can use HTML in discord chat:

Yes, if you want to message anyone an HTML code over Discord, you’ll need to consider these steps.