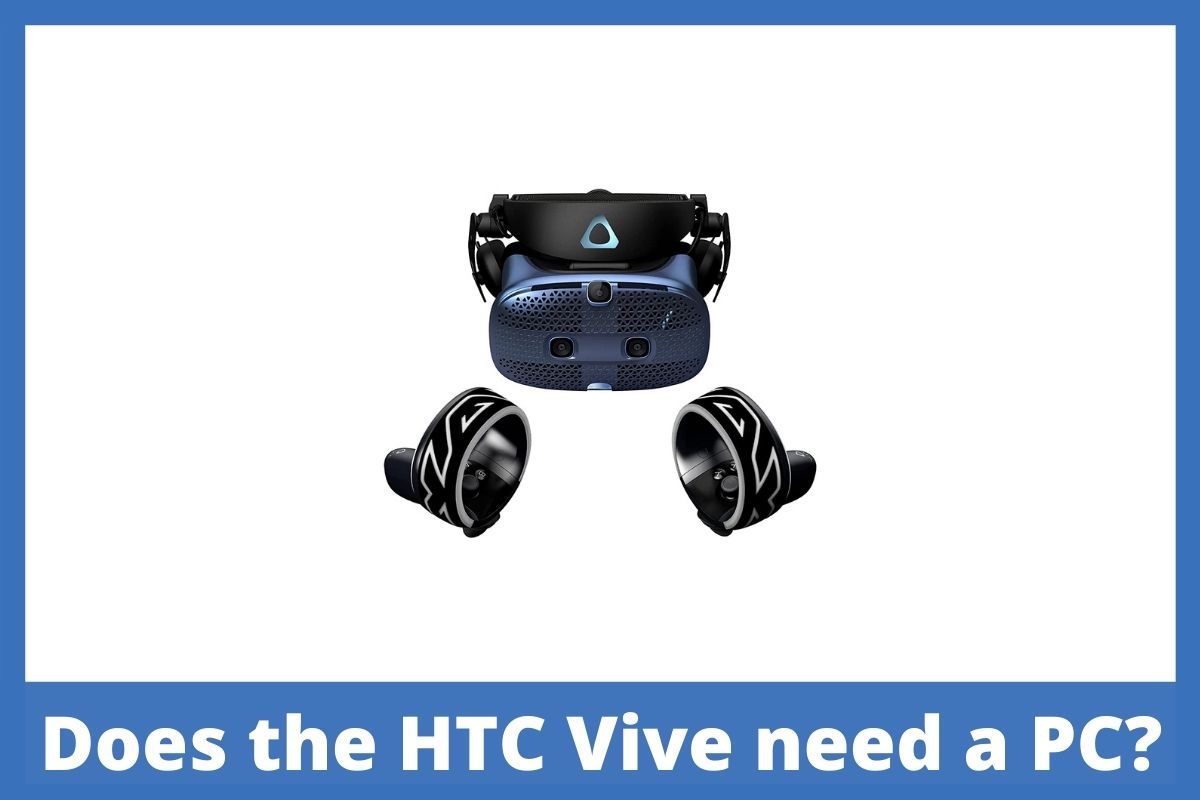 Nowadays, the market is flooded with various kinds of VR headsets that provide users with an immersive virtual reality experience. The prices of the headsets differ according to their features and capabilities.

There are several types of VR headsets. Some headsets are standalone, which means that they do not require any PC or a smartphone to be connected to use them. The most famous example is the Oculus Go VR headset which operates completely solely.

However, some headsets require a compatible PC to use them. One of them is the HTC Vive. If you have the question in your mind, does the HTC Vive need a PC? The answer to your question is yes! HTC Vive requires a PC to be used; however, it has some minimum system requirements.

Unfortunately for the people who don’t have a PC of decent specifications or their PC doesn’t meet the minimal requirements, they cannot enjoy the virtual reality experience through the HTC Vive VR headset.

Does the HTC Vive need a PC?

Before moving onto the main topic, we will look at some key features of the product to understand its compatibility more clearly.

HTC Vive was released in 2016. Since then, customers hold high regard for this VR headset. It has some incredible features that make it perform even better.

It is a multi-purpose VR headset used for gaming and for different purposes like watching 3D videos, business-related works, and development.

It comes with a Dual AMOLED 3.6 screen and display resolution of 1080 x 1200 pixels, making your VR experience even more realistic and phenomenal.

It has a refresh rate of 90 Hz that helps it take your reactions even faster. With 110 degrees of the wide field of view, you can look almost everywhere inside your screen. It has special lenses that prevent eye strain and insomnia.

Read: Does Oculus work with PS4?

Can your PC run it? Minimum system requirements

Below are the minimum system requirements for the HTC Vive. They are as demanding as you would always expect.

If we look at the CPU requirements, Intel i5-4590, AMD FX 8350 equivalent, or better, is needed to enjoy the HTC Vive VR experience on your PC.

RAM also plays an important part in the processing power of a PC. To run this VR headset on your PC, you would require at least 4GB RAM in your PC.

Operating systems are yet another thing to consider. Operating system earlier than Windows 7 is not compatible. This means that people having the old version of Windows would have to upgrade it to a newer version. Windows 7 SP1, Windows 8.1 or later, Windows 10 are the compatible versions.

How to connect HTC Vive to the PC

First, turn the link box on, connect the power adapter cable to its corresponding port on the link box, then plug the opposite end into an electrical outlet.

Finally, Connect the 3-in-1 headset (HDMI, USB, and power) wires on the side of the connection box to the matching orange trimmings. That’s it for the setup!

After connecting your HTC Vive VR headset to your PC, you would be able to enjoy hundreds of your favorite games and movies on this amazing VR headset. Not only this, developers who buy VR headsets for development purposes can make use of this amazing product.

Regardless of everything, a major production flaw of the HTC Vive is its compatibility. People are concerned about why the VR headset is not a standalone device.

Many new VR headsets are being released that are standalone and thus do not require a PC to be used. Due to this, there is a major fall in the sales of this HTC Vive VR headset.

People prefer to use a standalone VR headset and don’t demand a PC because if you’re investing a decent amount on a VR headset, you would not want to spend more on buying a compatible PC.

However, HTC is working on it and has promised to release many new VR headsets with increased features. HTC has recently released a new headset, HTC Vive focuses 3, a standalone unit, and doesn’t need a PC to run.

With that being said, we reach the end of this instructive article. We hope this article has been fruitful for you and that we successfully provided you with maximum information. Thanks for investing your time!

2 thoughts on “Does the HTC Vive need a PC?”