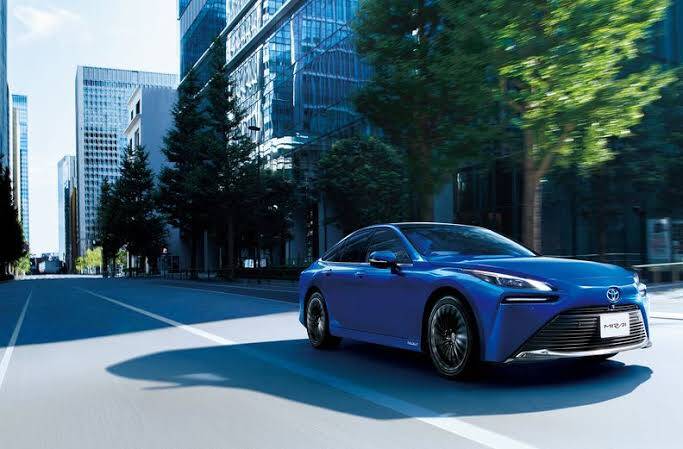 Toyota Mirai, a hydrogen fuel cell vehicle considered as the new second-generation dramatic car that has been spotted on public roads.

It’s the very first-time people got a glimpse of this new technology on roads. In the first view, this gets closer that the car is going to retain the concept of dramatic styling.

This machine was due on sale later this year and is now first displayed in the concept form last year at the Tokyo motor show.

This new Mirai will be a major step in the Fuel Cell Electric Vehicle (FCEV) as promised by the Japanese firm. The new Mirai is definitely going to bring change in fueled automotive.

The company claims a give a 30% increase in range compared with the current model. The current model manages to cover just over 300 miles. Apart from this, the new Mirai will also have an improved driving performance.

The new Mirai is built TNGA platform which is Toyota’s latest design platform.

Moreover, it will feature a heavily advanced design which includes a dignified grille and a sweeping, coupé-esque rear.

The company claims this Mirai will have an improved body rigidity and a lower centre-of-gravity if we compare it from the original Mirai.

If check out the design measurement, the new Mirai measured 4935mm long and will have a width of 1885mm. The wheelbase going to be a bit higher i.e. of 2920mm.

Moreover, the new Mirai will sit on 20in wheels and undoubtedlywill retain the four-door saloon layout which we have in the original Mirai. The original Mirai was launched in the year 2014.

What interesting is the interior design, which is said to be reworked and added up with new technologies. The new Mirai will feature a 12.3-inch central touchscreen and a digital accessory display.

With these adjustments, many of the controls were moved to the centre of the dashboard in the new Toyota Mirai.

The main difference comes with the number of seats, we’re the new Mirai will have a total five seats instead of original’s four.

This is all about the new hydrogen fuel cell vehicle Mirai, and for more such tech updates and interesting gadgets news, Stay tuned!