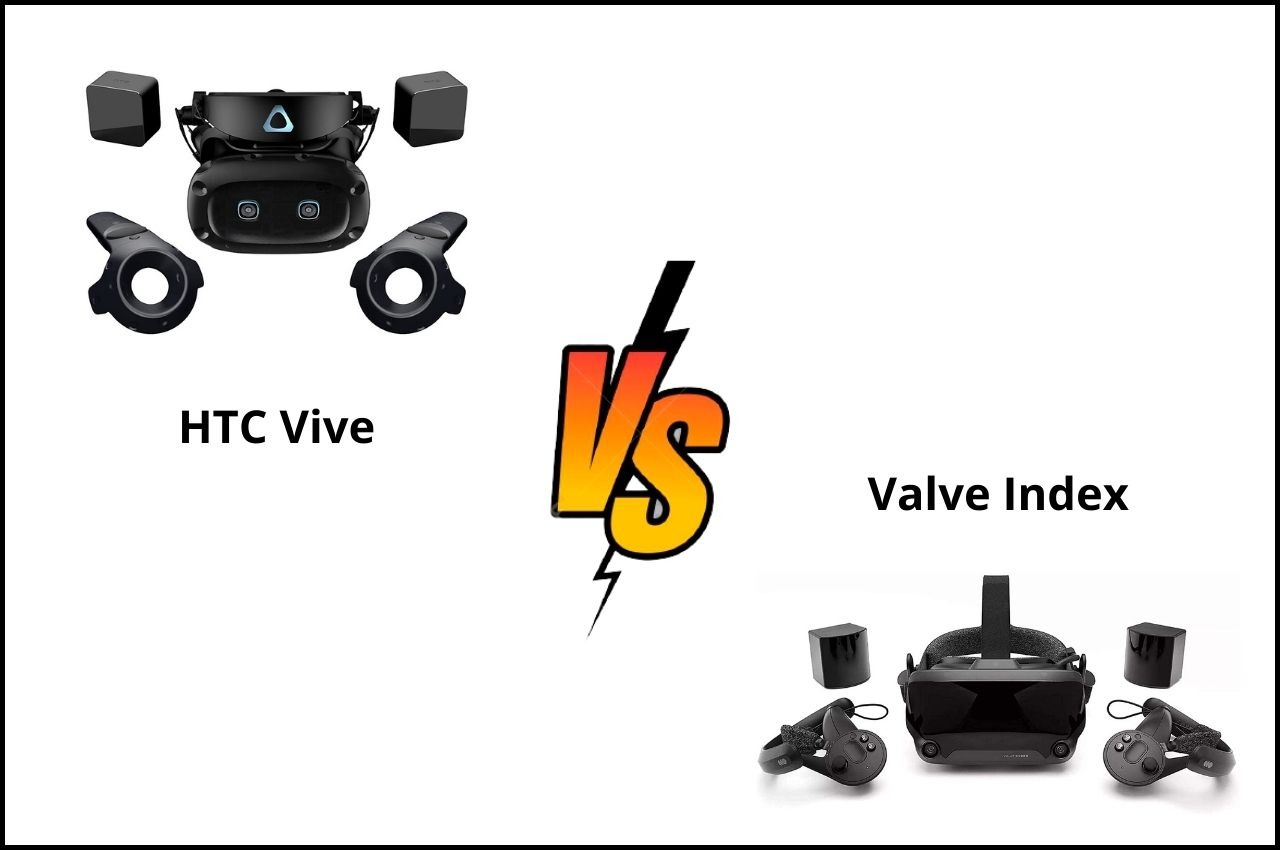 The pair of headsets hold features that are the love of VR admirers, and we’d like to introduce you to “HTC Vive Vs Valve Index”.

The production of Vive by HTC is immersive and highly interactive. Vive use is easy and comfortable enough to put on for longer playtime.

Although, foremost setup and installation can be effortful for you. After that, the vibe is non-problematic and easy to go.

The HTC Vive is at the forefront of precision navigation with built-in and external sensors and ease of wear. It is easy to use and can be easily accessed during long playing times.

Although, initially it is challenging for the installation. Minor inconvenience on the one side, but the HTC Vive is the best and excellent headset for the buyers who want premium quality.

HTC Vive was introduced as a combined task of the valve and HTC and it is manufactured as the competence product of the Oculus Rift. At the start of 2016, the couple of headsets’ final forms came into existence. There is a slight increase in the price after that but no changes in the features.

Initially, the HTC Vive was very expensive and gamers got it at the price of 800$ and then it was slightly reduced to 650$ so that the price can get a match with oculus rift.

Vive encourages a complete combination of rooms in a wider area in contrast to the Rift, which is the limit of particular types of experiences and games.

To use the HTC Vive, you must own a powerful PC like Oculus Rift and Vive Cosmos. HTC has announced the least specifications for PC to enable the use of this headset.

Valve index needs applause for the master features and quality. We can’t deny the factor of the price that is expensive but when you get the quality of graphics and visuals offered then it is acceptable and understandable. That’s why it earned the royal immersion title as the best quality VR headset.

Top VR headset for lovers. For those of you with a more powerful PC, room-level experience space, and Lighthouse station sensor setup, and who want to feel the royal cut of fingerprint input devices, this headset is totally on point.

Want to know how Valve Index guarantees it’s over $ 1000? The premium quality screen works at the rate of 144 Hz. Your hands feel the freedom to act entirely because of the straps the controllers have.

Now we are going to prove our statement with some proof. We can’t stop the discussion here.

In case you have a good budget and place then, your every penny is worthy enough to spend on valve index. The Valve Index has the best quality premium screen, excellent viewing field, top controls, and good tracking making it the most realistic headset up till now.

We can’t deny the fact that the cost after the entire setup of the valve index is more than 1000 dollars which is 3 folds greater than the oculus rift that is released now. That is equally powerful or more than valve but cheaper in terms of cost.

Having partnered with HTC in Vive-order production in 2016, then the decision was made by Valve to launch its sole product, a new premium visual headset, Valve Index. The need of vibe index is a powerful PC to work with. And the PC costs 1000 dollars too in case you don’t have any and you need to buy one.

Requirements of Pc for valve

We understand and can see the curiosity you have for your headset to empower this beast for excellent performance.

There are three key elements that your valve index is entirely based on, the three of them are RAM, CPU, and GPU. There is a huge impact on what you see. Now we are going to tell you what Valve Index needs. So by this, your trust can be earned by virtual headsets.

The valve designed a VR headset model that is an index. On the 28th of June 2019, the valve was released as the VR headset, Index is the 2nd real-time headset, and the first headset made by Valve.

In contrast, the VR model, HTC Vive, is developed by Valve and HTC. A unique technology used by HTC Vive to track “in the room”, enabling its users to navigate the 3D space and use hand-held tracking controls to improve communication with the environment that is virtual.

Although, the Valve Index and HTC Vive, two of the headsets are strong players and bring a realistic and interactive environment.

One thought on “Latest HTC Vive vs valve index Comparison”