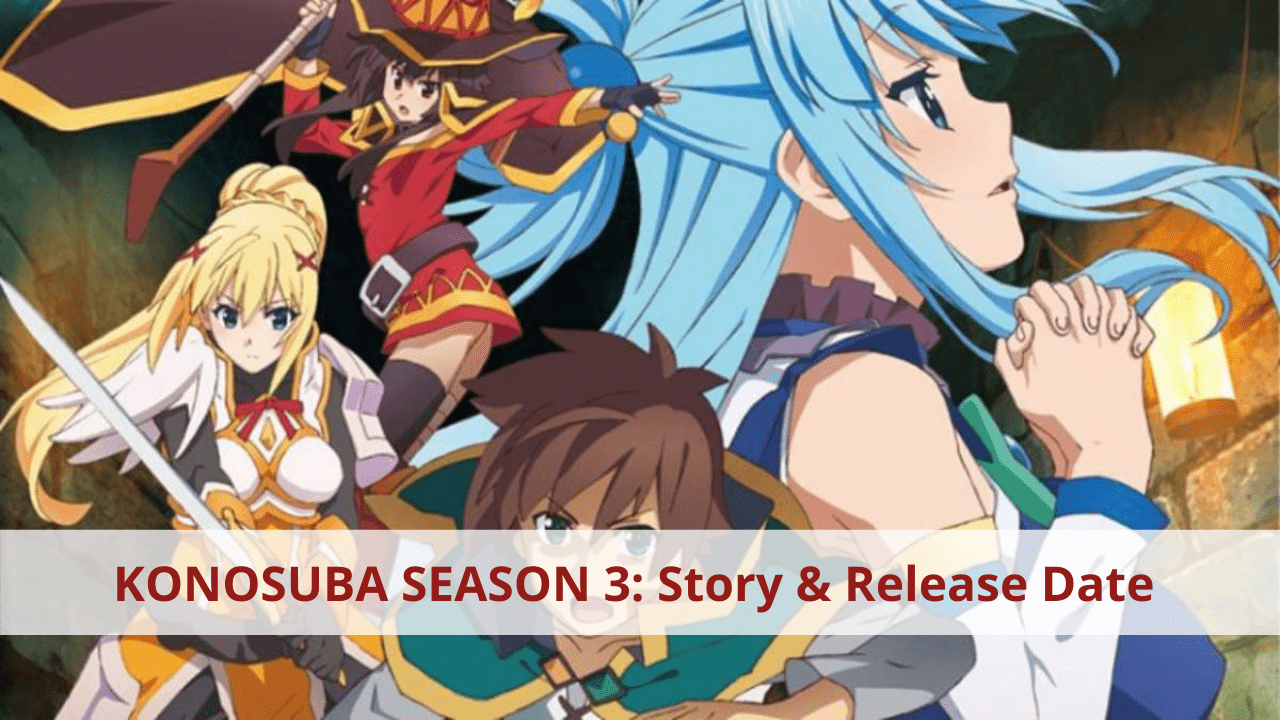 No more fantasizing of konosuba season 3. We have recent reports about the new season. Check in to acknowledge all about it!

The real name of konosuba is “God’s Blessing on This Wonderful World!”. But, it is known as Kono Subarashii Sekai Ni Shukufuku WO. It was a big hit when it aired the first time in Japan. It left the people speechless. That is why they are now eagerly waiting for the third season. But don’t worry guys in this article you will get complete information about it whether it is going to be released or not.

KonoSuba was first released in the form of a novel on October 1, 2013, later in the next year, it was published as a manga series of the same name. After that, it was released as an anime show. This anime show attracted not only Japanese but also has a fan following from the entire world.

The fans were enthusiastically waiting for the second season and then it happened and made them cheerier. Will konoSuba season three be aired or not? This question is inquired by a lot of people on various platforms. Different rumors confirmed that it will be aired.

SEASON 3 IS GOING TO BE AIRED SOON

As we know, KonoSuba season one premiered in 2016. Its original name is “This Self Proclaimed Goddess and Reincarnation in Another World!” It didn’t take much time to become a sensation among the people. Because of this, the second season was aired in 2017 and again this anime made them curious about the third one. Without it how do we know that Kazuma and Megumin will be combined or not? Will they move forward together or not? It is confirmed that the directors and writers have a full-fledged plan for season 3.

For getting more information about KonoSuba season 3 we need to look at its source information. In this case source material is novel, a LIGHT NOVEL. Do we have to check how many light novels have been published? How many volumes have already been used in anime? Has the story had a closed-end? Or they leave it open-ended.

There are 17 light volumes of KonoSuba that have been published in Japan. The last volume of KonoSuba was released on May 1, 2020.

Furthermore, volume 1-2 was used in Season 1 and volume 2-3 was included in season 2 and the movie which is released after these two seasons covered whole volume 5 but volume 6 has not been cast-off yet. This means the story is continued.

As far as we know there is no solid information about the release date of season three. They didn’t break any news about it. From the response of the audience, it is crystal clear that season three will surely be aired in 2020 or 2021. The team is sincere with us as they released season two within the year.

But if we talk about rumors, all the social media platforms are talking about it and it is said that they might release it in 2021. We should think positively about it. They are just taking their time for production. As a lot of time is required to make an anime series. Let them do their work and wait for the next one.

This show has massive interesting characters and all of them possess unique qualities. The distinctive qualities of characters are one of the reasons that people are addicted to it. The audience is hoping that all of them will return in season three but as far as we know no announcement has been about it by the studio.

Kazuma Sato is a leading character in the series. He is a sixteen-year-old boy who loves gaming. He stays in front of the screen for the whole day and has some friends. As we all know what happens to a person when he stays and adheres to the screen for the whole day. That person will have no social life and have no friends or only a few friends. Well, Kazuma has portrayed that type of personality.

The next one is Aqua. She is cool like her name. She is a goddess of Aqua. Our lead character turns her life upside down. That is the thing fans like the most in the series.

Another character is Megumi. She is 13-year-old and powerful too. She has power but the drawback is that whenever she uses her power spell to fight with the opponent, she is unable to use it again for the whole day. One more important character is darkness but the flaw is that she dreams about the monsters and abusive husband only.

Fans are impatiently waiting for the 3rd season. As it is described earlier the two seasons have covered four volumes only. So there is still hope about the 3rd season. Most of the videos on YouTube and other social media platforms related to season 3 are created by fans, not the production house. So, it means no trailer has been released yet. All you can do is to keep a check on online platforms, so stay in touch with us.

WHY ARE THEY DELAYING SEASON 3?

As we all know, Covid-19 is prevailing everywhere. Everyone is isolated in their homes. No production has been in the world for now. We can say that season 3 might be delayed due to the Covid-19.

One of the reasons is, this anime is less expensive as compared to the other cartooning series. The reason is they have just made 10 episodes per season. We should look forward to its expenses to get the most updated information about it.

One thought on “WILL KONOSUBA SEASON 3 BE RELEASED?”